I’ve traveled to many parts of the world, but nothing quite like what I experienced in upper Mustang. As I progressed towards Lo-manthang from day one – leaving behind lower Mustang, my journey transformed into all the more emotional and spiritual joyride. I still cannot fully fathom how these landscapes changed me. All I know is; it affected me, to the point I would almost burst into tears. It was unlike anything I had ever seen or experienced in my life.

Planning to visit upper Mustang? my friends have built this awesome map, please do check it out!

As I left for Chele from Kagbeni, that’s when it slowly began to dawn on me, this journey was going to be one of a kind. Just a few minutes walk towards Chele in the break of dawn – I find myself all alone. If an alien abducted me, or if I fell off the cliff and died, my body would remain untraceable. Nobody would know where I took my last breath. The isolated nature of this place was terrifying, at the same time deeply moving. Turns out, it was just a beginning, the best and the most thrilling part had yet to come.

I took the last flight to Pokhara from Kathmandu on May 16, 2014. Stayed overnight and flew to Jomsom the next day. I cannot talk about this trip without mentioning the Jomsom flight, cause it was mind-blowing. The airplane literally flies in between the hills. You can see the trees so up close, it is ridiculous!. It was the very first flight to Jomsom and I started trekking pretty much right after I landed.

Given below is a synopsis of all my stops:

The hours mentioned is the time it took me to get to the destination. Depending on your pace, it may take you shorter or longer. On top of that, I also got lost on the way so, if you know where you are going, it shouldn’t take you that long.

Jomsom – Kagbeni:  3 hours
This was the shortest walk and still one of the most tiring ones for me. I got the taste of what the trek would be like on the way to Kagbeni. This was still a busy route with a lot of people going back and forth. So, it felt pretty normal. The first hotel I went asking for room said they were full. I freaked out and I immediately agreed to stay at the second hotel I checked; with a fear that I may not get a place to stay. There was an old lady – when I asked about the wifi, she showed me the router. So, I thought it would be cool. But nobody knew the password. In the entire trip it was the worst hotel I stayed at. Clogged toilet/bathroom. Didn’t get to shower. They were having some puja. I was so hungry – but didn’t get to eat until the Lamas did. Still having said that, it was relatively cheaper.

Kagbeni – Chele: 6 hours
The moment I left Kagbeni – that’s when I started getting lost. I got lost almost everyday, then on. But Chele wasn’t too bad, considering there were other people near by as well. After walking for hours I was glad I was very close to Chele. But then, I realized it was on a top of a hill. I took the longer route that jeep takes cause I did not think I could conquer the hill. I asked this guy about the path to follow, who was washing his jeep. He said- I was taking a longer route obviously (pointing at the sheeps grazing) he continued, “just follow the sheeps.” Those sheeps were walking uphill almost on a 90 degree angle. I was like, are you serious? After a lot of fuss, I managed to conquer my fear and got all the way to the hotel called Bishal Guest House. By then I was so hungry, I ate a plateful of rice. And it was the best food I had tasted in the entire journey.

Chele – Syanboche: 6 hours Syanboche – Ghilling: 2 hours
Chele to Syanboche is an absolute thrill, this is where you get the most awe inspiring views but not so easily, you’ll have to first cross a few hills to get the best views. This was the hardest one for me. As I had to climb up and get down multiple hills, it seemed like an unending journey. But the views were just amazing! Syanboche has just about 10 houses. Only stopped there for lunch, then trekked another 2 hrs or so to Ghilling.
Spent a night at New Kunga hotel.

Ghilling – Ghami: 4 hours
I was extremely tired by the time I got to Ghami and the fact that I got lost (again!) and had to climb one extra hill, wasn’t very happy about it. It was from here that my back started bothering me quite significantly. But all that changed when I got to Royal Mustang Hotel. The weather was perfect. If I could show the world what happiness means, it was that moment. When I was sitting on the chair, with the sunlight on my face. Feeling relieved that there was no more walking to do, no more back pain, soaking in the beautiful scenery, accompanied with great food, a total bliss!

Ghami – Tsarang: 5 hours
The way I got lost on the way to Tsarang; it was truly into-the-wild kind. I was supposed to get to Tsarang in three hours. But I had already crossed 4-hr timeframe and I wasn’t seeing a single settlement. Then it hit me, I am royally lost.
Funny thing is, at a time like this your brain works both ways. It tells you, now you will die. Also, it triggers survival instinct- gives you all kinds of ideas to find a way to survive. Thankfully my survival instinct overcame my fear and of course, like every day with a little sobbing and still with a lingering thought of death – I kept walking and walking and walking and saw a few houses miles away. Turns out it was another small village called Tarang, I kept walking straight up the cliff – then I spotted a bigger village on the right. That was Tsarang. Saw an old man listening to a radio. He confirmed, the one on the right is Tsarang. Now, all that I had to do was keep walking. Here I stayed at Maya’s Inn.

Tsarang – Lo-Manthang: 4 hours
Finally after walking for hours I got the glimpse of Lo-Manthang. Picture below shows the very last leg of the journey. In Lo-Manthang I stayed for two days at Himalayan Guest House, before heading back to Kagbeni-Muktinath.

This was technically a solo journey; hence I cannot emphasize enough how safe this place is, considering I came back alive and well. I didn’t have a guide. If you are going on your own I would recommend you to hire a guide. It’s only been a few months that road was introduced to upper Mustang. It is still at an early stage. Only jeep runs on the traditional trekking route. The bus or trucks take the path of Kali Gandaki, away from the trekking route. If you want to enjoy the view, trekking is still the best way to get to Lo-Manthang. I took the jeep on my way back to Chuksang/Kagbeni/Jomsom, cost me Rs 1200. What took me days, took only 5 hours on jeep. From Chuksang, you have to walk about half-an-hour, take either private jeep or public bus to Kagbeni/Jomsom (If you are traveling close to Monsoon season, as you have to cross Kali Gandaki). Public bus leaves two times a day at 9 a.m. and 4 p.m. from Chuksang. Transportation would not be an issue on your way back.

Mustang is a kind of place that can either change you or not. Its landscape can fill you with awe or leave you feeling empty. No matter where you go in Nepal, each place has the potential to change you internally. But I’m pretty sure, Mustang experience is one of a kind. If you open yourself up to this place, it will embrace you. It will take you inside-out and leave you so bare, exposed – with just you, allowing the truest part of you to experience the magnificent beauty of this barren landscape. Its vast dessert mountain, sparse vegetation, its wild animals, birds, everything I saw affected me. It was a kind of place where I just wanted to quietly sit and be awed by the surroundings; as barren as it was, it was equally breathtaking. If you plan to visit a part of the world next year, make it upper Mustang. You will not be disappointed.

Get a glimpse of my trip:

Having issues with Vimeo? The same video is also available on Youtube. 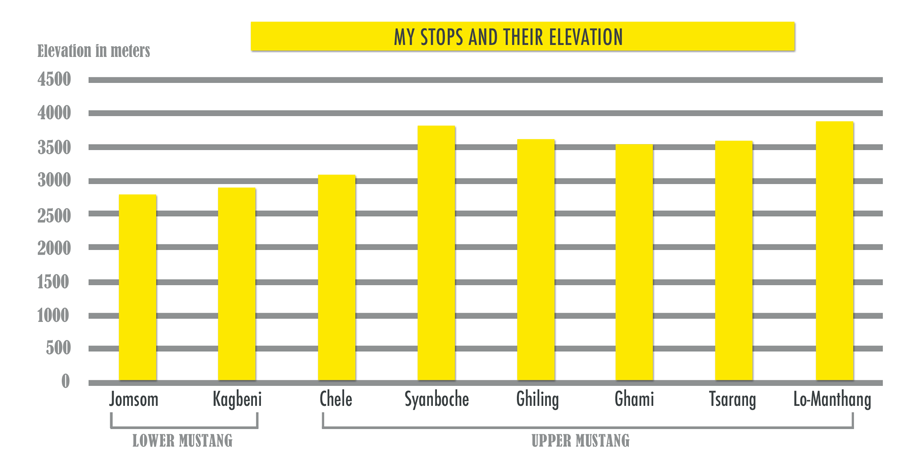 Planning to visit upper Mustang? my friends have built this awesome map, please do check it out!

On May 17, 2014, I flew to Jomsom from Pokhara. Jomsom was the starting point of the trek. Considering I had never in my life done anything like this – I had no idea what to expect. Given below were the only two trekking gears I had bought. Windproof jacket (cost me about Rs 2000 – North Face knock off) and an adjustable stick (Rs 500) – both I got from Thamel. 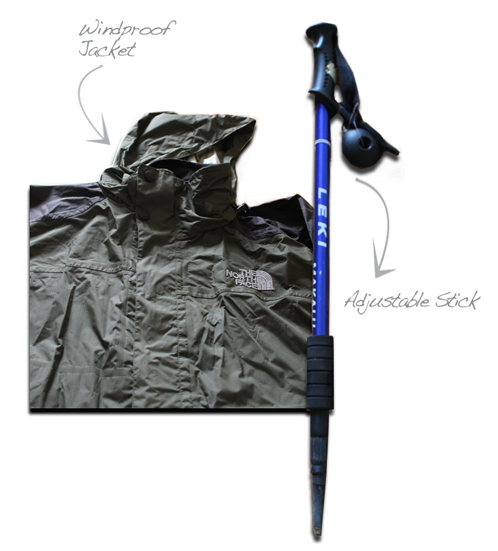 Rest were what I already had, didn’t get a trekking boot either. I utilized my old Under Armour walking shoes that worked out just fine. If I were to recommend you the most essential gear, a stick is a must. Especially, if you have a back problem like I do and also scared of height. Doesn’t need to be fancy. Just a simple wooden stick would work too. Will come in handy for steep uphills and downhills.

I would also recommend a rucksack – that helps equally distribute the weight all over the body. I didn’t get one. I just had a simple backpack. Because my back almost gave up on me, I really wished I had gotten one. My goal was to carry only the essentials, to keep my backpack as light as possible. But no matter how light my bag was, the weight did bother me a bit throughout the trek.

By mid-May, Kathmandu and Pokhara was extremely hot. But Jomsom was quite chilly.
That very day I made it to Kagbeni. The greater the elevation, colder it will get. So make sure to pack a sweater or a fleece if it’s not too heavy and a trouser as well. I didn’t carry my sweater, I found the weather noticeably cold as I moved upward from Ghami to Tsarang, eventually Lo-Manthang. Also, every morning I would begin trekking at 4:45 a.m. Even though it was cold in the morning – when the sun was up it would burn my skin like crazy. Make sure to pack sunscreen lotion.

Another thing, don’t forget to grab some snickers or energy bars to get you going. Also, water bottle to keep you hydrated. It gets windy as the day progresses, a scarf would come handy, including a sunglass that will protect your eyes.

When you are taking the trouble to go all the way to upper Mustang; it would be foolish to not capture the moments. Another vital gear: camera!

Things to keep in mind while trekking:

My future posts will contain additional details about this trek. Until then, I want you to bask in the beauty of the picture below. It was the last leg of the journey, very close to Lo-Manthang.

More about this trip: http://wp.me/p2ImKX-ik

Get a glimpse of my trip:

Having issues with Vimeo? The same video is also available on Youtube.